The Birds are coming! Pretty much every row we did not net became food for the Birds - they are very efficient pickers too. Luckily they did leave enough fruit to allow me to do more Brix readings. Brix were measured by testing 3 to 4 grapes at various locations on each row. So as of September 19:


Let the wine making begin! A few members selected varieties to make wine from and harvest on L'Acadia Blanc (46lbs), Petiti Milot (34lbs), Leon Millot (108 lbs, with a bit of Pinot Noir) and Osceolo Muscat (125 lbs) was done on Sept. 24.

48-05-83 and Baco Noir are also slated for the carboy, but they need a bit more time on the vine to ripen up still.

Pretty low yield on the L'Acadia as the bunches were very loose and not very populated. This is likely from poor weather in late spring during bloom. Hopefully it will improve next year. The yield on the Petit Milo was very good, but as it was not netted, there was not much fruit left by the time it was harvested. The two types were mixed into one batch of wine and with final Brix of 23 it should make a very nice wine.
Posted by Unknown at 07:55 1 comment:

As mentioned in the previous blog, an update on the Red status is below. The data for this post is from August 14 2016 so I am a bit slow in posting. I will do an update soon with some Brix numbers now that we are into September.

August is nearly half over now and the vines are quite happy with recent wave of sunshine and heat. Our spring was really great, but the early part of the summer was sadly quite wet and cooler than normal. as a result the vine growth has fallen back to about the same as last year.

Fruit Set: It appears that vines that had bloom quite early were better of this year as vines with later bloom did not have great fruit set. I suspect this is a result of cooler temperatures and heavy rains that may have  impacted the pollination process.

Powdery Mildew (PM): Despite a fairly aggressive and consistent spray program, PM still reared its ugly head.  We have trimmed all the fruit from Chardonnay, Auxerrois, Mad Angie and Mad Sylvaner. Siegerrebe is looking like it has some impact as well and may need some culling shortly

June is nearly over and it has been a very wet and cool month.  This is not unusual for June, just a stark contrast to some of the early weather we have had.

The vineyard has continued to grow despite the weather and we are still a bit ahead of previous years. All varieties have completed bloom and moved into fruit set.

So what is bloom and fruit set?
The grape flower does not have conspicuous petals like other plants. Instead, the petals are fused into a green structure commonly referred to as the cap. The cap encloses the reproductive organs and other tissues within the flower. A flower consists of a single pistil (female organ) and five stamen, each tipped with an anther (male organ).  The cap separates from the base of the flower, becomes dislodged and usually falls off, exposing the pistil and anthers (bloom phase). The anthers may release their pollen either before or after cap fall. Pollen grains randomly land upon the the pistil, allowing pollination. The  subsequent growth of berries is called fruit set.


As always, comments and feedback is encouraged.  Hopefully we get some sustained sunshine and heat and get our fruit on!
Posted by Unknown at 16:53 No comments:

As we move in to the heat off summer, the vineyard continues to impress this year.  From my last post we were roughly 3 weeks ahead of previous years and the trend has been maintained.  By May 1 100 % of all varieties had active growth.  By June 1 a few vines (Osceolo muscat, Leon Millot) are already at bloom. Fruit set is not far off. 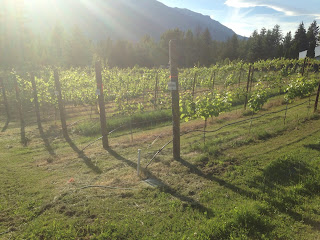 We have also been maintaining the spray program as well as the weed control and the efforts are paying off as the vineyard looks quite established.

We had a pretty wet May and with the heat of June, things really took off.  Volunteers have been busy suckering, pruning and tucking vines into the trellis wires and doing weed control.  Keeping on top of the vines and weeds is critical this year as we really want to have the best representation of our fruit. 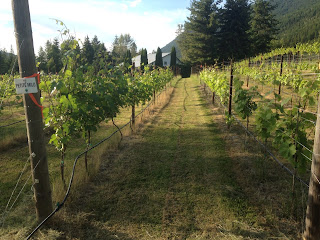 We will be doing a fundraising event concession in Burton during the Burton City Daze on June 18. The concession will be open for lunch between 11AM and 2PM so come on out to visit Burton, partake in some activities (Burton relay Race, Kootenay Sufferfest etc) and have some fun.

Hope to see you all there!
Posted by Unknown at 17:04 No comments:

This spring we made the difficult decision to cull a few of the under performing varieties.  We felt that after 3 years these vines were far behind where they should be and without significant more work to pinpoint the reasons (soil, nutrients, climate etc.) things would not change.

So goodbye to Marquette, Baltica and Cab Libre.  In addition we also removed Ortega.  Ortega performed well, but its susceptibility to powdery mildew proved  to difficult to control and always ended up spreading the mildew to the neighbouring vines.  While it is sad to pull up living vines, this is what he research was for.

With a down turn in our volunteer pool the last while, we also decided to shorten some rows to make it more manageable.  We kept five full length rows (Siegerrbbe, L'Acaida Blanc, Osceolo Muscat, 48-05-83, Leon Millot) and shortened the rest to about 15 vines.

On the good new front - we are way ahead of last year at this point. As of April 21 the vines showed the following progress:


At this point last year we were still in bud swell only, as it was in early May before we had any bud burst.  It is interesting to note that the order the vines are progressing at is the same, Epicure and Regent for example are always later than other vines.


You can see our weed control has already started for this year.  Our Vinegar solution proved effective and the hope is to hit the weeds a few time early in the season and then cover with a mulch to control them.  this would hopefully reduce the amount of weeding and weed whacking we had to do last year.


As always, if you have any comments or suggestions please post in!

As promised in my last post, below is the results of the 2015 weather station data collected at the research plot site.  This station collects not only the temperature but also: leaf wetness, solar radiation, wind speed (and gusts) and relative humidity.  I showed the 2014 data as well for comparison.  The temperature data was included in the previous blog and not shown here.


2014 Data
So what do we take from this?  We had a pretty hot and dry year and our Leaf Wetness (dew point essentially) increased because of this.  Why? Our RH is about the same as 2014, so that means the dew point is pretty close the actual temperature (at 100% RH the dew point and temperature are the same and looking at individual data points we had many many days at 100% RH).  In a nutshell, even in hot dry weather our vines are getting wet - leading to all the wonderful mildew problems.
The real take-away is how important it is too keep our vines tied up, our canopy nicely pruned and the excess leaves pulled to allow the breeze to aid in keeping things dry.  As we learnt last year, even a diligent spray program fails if the vine management is not kept up.

Solar Radiation?  I would have expected it to increase.  I thought I was starting to understand just a little bit about what solar radiation is, but not really sure why our overall average would be less, when our season was really quite warm on a day to day basis. Any smart climate folks out there able to explain??  I blame the darn wasps!

Looking forward to a new growing season.  Pruning work bee coming up Sunday March 6 at 9AM.  Stay tuned!
Posted by Unknown at 19:40 5 comments:

We have been slowly visiting all the dataloggers and downloading for the 2015 season.  This year we seemed to run into a few problems with our HOBO units.  We had multiple failures in each region.  Some were attributed to animal damage, some just seemed to stop working and other were logging, but the data is corrupt.  I suspect we have neared the end of life for our units.  Out of the 38 we have, 12 experienced some type of problem. Hopefully a reboot of the units will correct the problem for next year.

I will post the data from our climate station located in the test plot in an upcoming post.

Looking at our frost free days, we do see an increase again this year. In many locations, there had not been a fall frost occurrence until well into November. For our purposes we used “slight” frost as our parameter, using 0°C for our last spring frost and -2°C for our first fall frost.

We expected that our 2015 was a warmer year, and for the most part it was.  We had more FFD and most areas showed an increase in GDD.

Growing Degree Days (GDD) is a measure of heat accumulation used to predict plant development rates such as the date that a crop will reach maturity. GDD is calculated by taking the average of the daily maximum and minimum temperatures minus a base temperature, (in our case 10 °C).  The yearly GDD is cumulative throughout the growing season (April 1 to October 31).